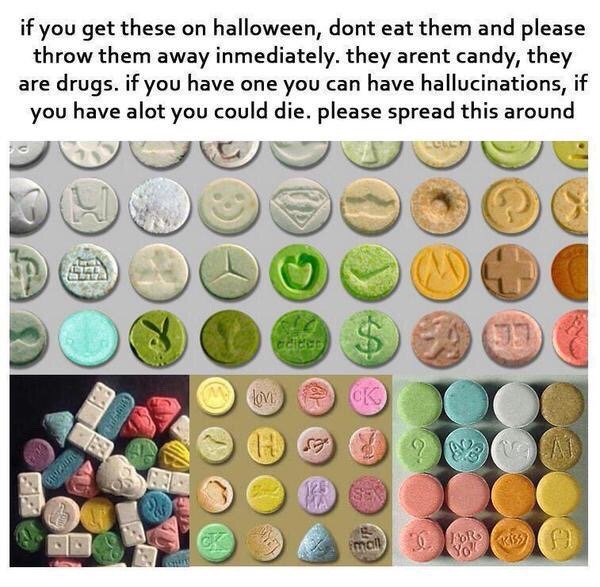 just thought I’d pass this on to tumblr, please be careful at Halloween!!

omg someone was handing these fuckers out at the art store today! as “Halloween candy” they smelled awful so i threw them in the trash!
DEAR LORD!

So they are actually doing this!

Remember everyone! Don’t eat candy that has been opened or looks SUPER SUSPICIOUS. Especially these!

have… have none of you seen a tab of E

well now that I googled it I have

But here’s the thing, this post is ridiculously uninformative, even if it were true.

Your responsible recreational drug-using friend should advise you what they’re giving you, explain to you how it works, and give you the opportunity to try it out in a situation you’re comfortable in, with a backup plan to get you somewhere quiet and safe in the event of a bad trip.  And furthermore, they should always respect your declination of the offer.

If they don’t, they’re a jackass, drug-user or not.

Plus, this stuff costs serious money.  Why give it away to strangers for a laugh?

Let’s get off that train, it’s presumptuous and helps perpetuate that War on Drugs B.S..

And by now we all fucking know to only eat wrapped-up candies from our trick-or-treat bags and to carefully inspect or throw out anything homemade from a strange source.  Safe Hallowe’ening 101, everybody.

But!  Let’s talk a bit frankly about the compound pictured here.

MDMA/Ecstasy is a chemically synthesized compound, so if you were to “eat” the “candy”, it would pretty much taste like chewing on a Tylenol.  You’d get that same bitterness from the acids.  By and large, it would be ridiculously unappealing.  Plus, the tabs are, generally speaking and most of the time, literally shaped like pills, sometimes embossed with a cool symbol.

They really don’t resemble candies at all, and on the off chance you got a tab that was, the jig would be up the minute you put one in your mouth.

Provided that the compound in the tablet is actually MDMA, you will not have hallucinations.  You will have euphoria, elevated body temperature, and a ridiculous come-down but everything should be over in about 12-14 hours.

If you THINK you have been duped into taking E or something that looks like E, here is what you do:

Be safe, but be informed.  And for the love of toast, don’t take unwrapped candies from strangers.

Now I will reblog this since someone sensible commented on it

Snopes is also on it.  this is just a variant of the usual prehalloween warning of EVIL CANDY.  Instead of the warning about razor blades in candy, we’re got MDMA instead.

Snopes also helpfully point out that photo represents several hundred dollars worth of MDMA. So unless your neighbor is a rich supervillian, your kids are not getting this for Halloween.  (and honestly, if you lived next door to a rich supervillian wouldn’t he give out something more EVIL like mutagens or mind control tiaras or something?)

Soooo, @solarbird, what are fashionable super villains handing out at the lairs this year?

Depends upon the child and the villain. Traditionally, I’ve gone with heat ray schematics wrapped around Red Hots. But I’m thinking of changing it up this year, what with Fallout 4 being soon, and wrapping instructions for simple household nuclear reactors around Atomic Fireballs instead.

I want a mind-control tiara.

…oh wait you probably meant the *wearer* gets mind-controlled.

What the hell kind of person stamps the /motorola logo/ on their drugs? idgi

Conservatives: Let's go back to the good old times of the 1950s. 1950s: Had 92% income tax for the mega wealthy which allowed for households with a single breadwinner. Had minimum wage high enough to get somebody through college. Conservatives: No... not that part.