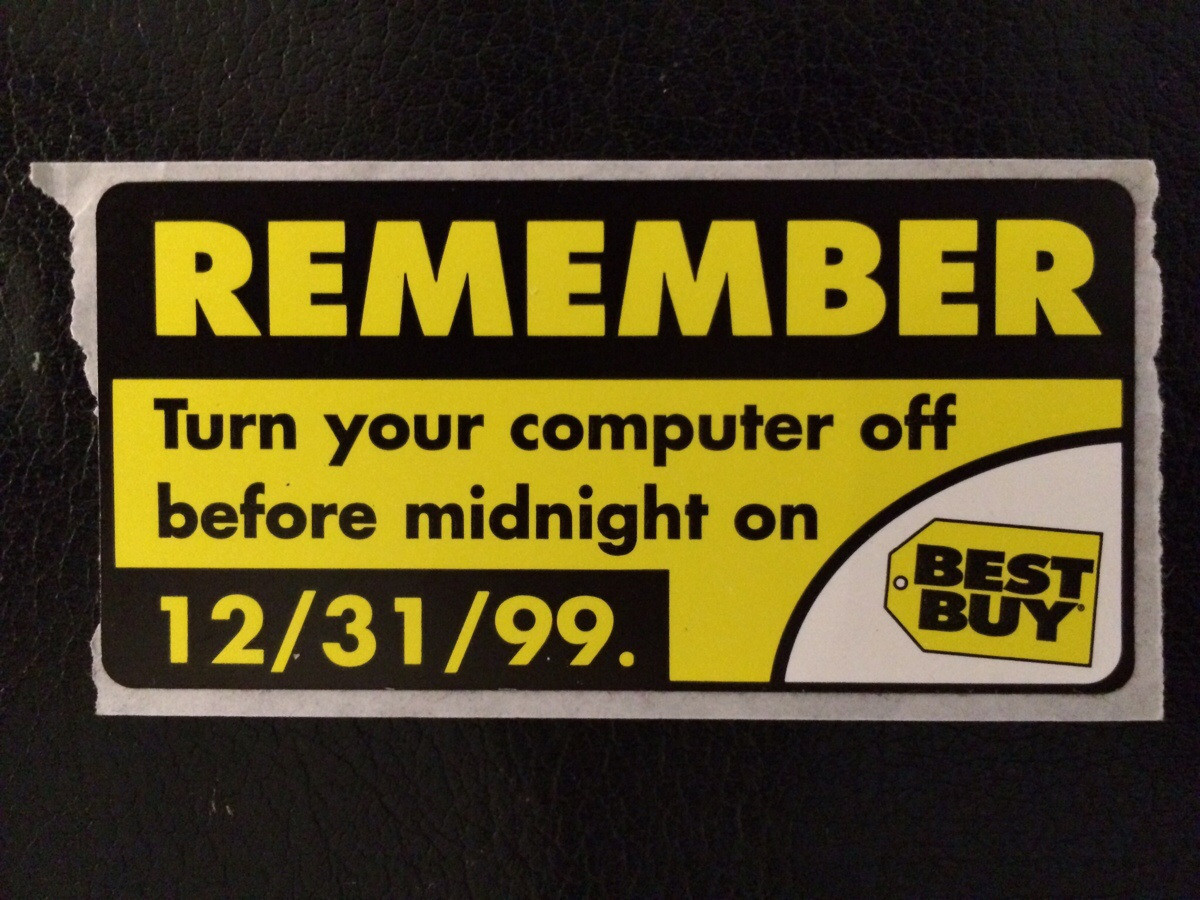 what. why? someone pls explain to me pls i wasnt born yet in 1999 why turn computer off before midnight? what happen if u dont?

y2k lol everyone was like “the supervirus is gonna take over the world and ruin everything and end the world!!!”

This is the oldest I’ve ever felt. Right now.

It wasn’t a virus, it was an issue with how some old computers at the time were programmed to deal with dates. Basically some computers with older operating systems didn’t have anything in place to deal with the year reaching 99 and looping around to 00. It was believed that this inability to sync with the correct date would cause issues, and even crash entire systems the moment the date changed.

People flipped out about it, convinced that the date discrepancy between netwoked systems would bring down computers everywhere and shut down the internet and so all systems relying on computers, including plane navigation etc. would go down causing worldwide chaos. It was genuinely believed that people should all switch off computers to avoid this. One or two smart people spoke up and said “um hey, this actually will only effect a few very outdated computers and they’ll just display the wrong date, so it probably won’t be harmful” but were largely ignored because people selling books about the end of the world were talking louder.

In the end, absolutely nothing happened.

I’ve been a programmer working for various government agencies since the early 1990s and I can say with some confidence:

NOTHING HAPPENED BECAUSE WE WORKED VERY HARD FIXING SHIT THAT MOST DEFINITELY WOULD HAVE BROKEN ON 1-JAN-2000.

One example I personally worked on: vaccination databases.

My contract was with the CDC to coordinate immunization registries — you know, kids’ vaccine histories. What they got, when they got it, and (most importantly) which vaccines they were due to get next and when. These were state-wide registries, containing millions of records each.

Most of these systems were designed in the 1970s and 1980s, and stored the child’s DOB year as only two digits. This means that — had we not fixed it — just about every child in all the databases I worked on would have SUDDENLY AGED OUT OF THE PROGRAM 1-JAN-2000.

In other words: these kids would suddenly be “too old” to receive critical vaccines.

Okay, so that’s not a nuke plant exploding or airplanes dropping from the sky. In fact, nothing obvious would have occurred come Jan 1st.

Without the software advising doctors when to give vaccinations, an entire generation’s immunity to things like measles, mumps, smallpox (etc) would have been compromised. And nobody would even know there was a problem for months — possibly years — after.

You think the fun & games caused by a few anti-vaxers is bad?

Imagine whole populations going unvaccinated by accident… one case of measles and the death toll might be measured in millions.

This is one example I KNOW to be true, because I was there.

I also know that in the years leading up to 2000 there were ad-hoc discussion groups (particularly alt.risk) of amazed programmers and project managers that uncovered year-2000 traps… and fixed them.

In many cases because admitting there was a problem would have resulted in a lawsuit by angry customers. But mostly because it was our job to fix those design flaws before anyone was inconvenienced or hurt.

Absolutely true.  My Mom worked like crazy all throughout 1998 and 1999 on dozens of systems to avoid Y2K crashes. Nothing major happened because people worked to made sure it didn’t.

Now if we could just harness that concept for some of the other major issues facing us today.

this meme came so far since i saw it this morning. god i love tumblr teaching tumblr about history.

As a young Sys Admin during Y2K, I can confirm that it was SRS BZNS.  I worked for a major pharmaceutical company at the time.  They spent millions of dollars on consultant and programmer hours, not to mention their own employees’ time, to fix all their in-house software as well as replace it with new systems.  Sys Admins like myself were continually deploying patches, updating firmware, and deploying new systems in the months leading up to Y2K.  Once that was done, though, the programmers went home and cashed their checks.

When the FATEFUL HOUR came along, it wasn’t just one hour.  For a global company with offices in dozens of countries, it was 24 hours of being alert and on-call.  I imagine that other large organizations had similar setups with entire IT departments working in shifts to monitor everything.  Everyone was on a hair trigger, too, so the slightest problem caused ALL HANDS ON DECK pages to go out.

Yes, we had pagers.

For hard numbers IDC’s 2006 calculation put the total US cost of remediation, before and after, at $147 billion - that’s in 1999 dollars.  That paid for an army of programmers, including calling up retired grandparents from the senior center because COBOL and FORTRAN apps from the ‘60s needed fixing.

Also note that there were some problems, including $13 billion in remediation included in the figure above.  Some of these involved nuclear power plants, medical equipment, and “a customer at a New York State video rental store had a bill for $91,250, the cost of renting the movie ‘The General’s Daughter’ for 100 years.”

Y2K was anything but nothing.

Reblogging because this is a side to the story I had never heard.

Yes, but also there are people who weren’t born yet in 1999 and they’re old enough to be on the internet.

Everything about this is just….wow.

I’ll be in my corner, decomposing.

jewlsies: how do straight white boys survive in the real world They don’t. S'why they live in their own little worlds. original post