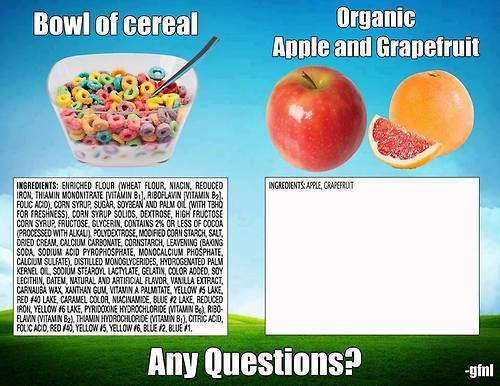 Just like if you break apples and grapefruit down into their chemical components, I’m willing to bet that most people wouldn’t recognize the “ingredients” either. It’s a bunch of words you don’t even know: Don’t use these scare tactics - Chemicals aren’t inherently bad. Literally everything is made up chemicals. Trust me, your body knows what niacin is. It knows how to digest fructose and calcium sulfate. Even if you only consume the most basic and “real” foods that are pulled directly off the vine, you’re still ingesting a series of chemical compounds that you probably can’t pronounce. That’s okay.

Despite that, there’s a difference between eating natural chemicals and artificially produced chemicals and you can’t really dispute that natural ingredients are better for you

Arsenic is a naturally occurring element that is present within many whole foods, yet it can kill you if ingested in significant doses. Poison ivy is natural, but it sure gives people a nasty rash. Peanuts are natural, but a solid percentage of the population is deathly allergic to them. Asparagus berries can make you incredibly sick. Even just looking at the example given in the first post, we have to consider apple seeds - They contain a small amount of amygdalin, which is a cyanogenic glycoside. It is very possible to eat enough seeds to cause a fatal overdose.

Compare it to artificial chemicals like the fluoride complex that is added into many water systems in order to prevent tooth decay. When we drink water, it’s presence is a huge benefit to the population. By the time you drink enough for the dose to hurt you, you’d already have experienced water poisoning. There’s also d-ascorbic acid, a synthetic version of vitamin C that works as an antioxidant. Don’t forget about iodized salt, which works to prevent iodine deficiencies (which effects roughly two billion people around the world and is currently the leading preventable cause of intellectual and developmental disabilities). From the first post’s example, enriched flour is the first cereal ingredient listed: This allows the consumer to get a serving of niacin, iron, folic acid and thiamin. These vitamins are a necessary part of a daily balanced diet, but if we only stuck with naturally produced foods, the average consumer would miss out on the full amount needed. This is called food fortification and it allows many people (especially those under the poverty line) to consume all their daily vitamins and minerals without overextending themselves and their budget.

At the end of the day:

No one here is arguing that the above posted breakfast cereal is inherently and always going to be “better” for you than an apple. That would be ridiculous. But it’s also silly to say that an apple is automatically better just because it isn’t man made (which most sort of are, considering the history of orchard cultivation and grafting, but that’s for another post). What I’m saying here is that this “Chemicals are bad! Natural is good!” method of thinking is such a simplistic and dumbed-down way of looking at food. Don’t label foods as good or bad for everyone just because your eyes glaze over at any ingredient list longer than two syllables.

Use technology and medical advances to your advantage! You don’t have to blindly eat what you find in nature anymore. We’re beyond that stage of civilization - Don’t let science frighten you.

stabbingcontest: Best ending to a gifset ever! original post