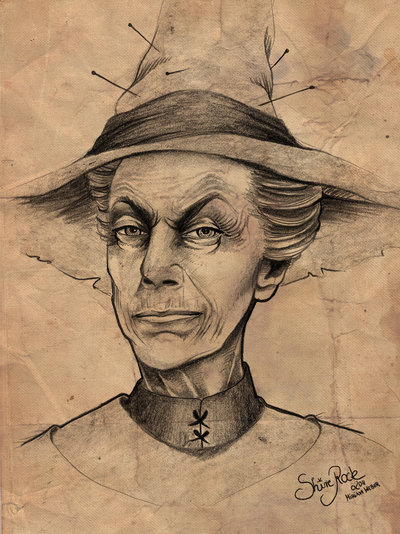 “A bit judgmental, my grandmother.”

“Nothing wrong with that. Judging is human.”

“We prefer to leave it ultimately to Om,” said Oats, and, out here in the dark, that statement seemed lost and alone.

“Bein’ human means judgin’ all the time,” said the voice behind him. “This and that, good and bad, making choices every day … that’s human.”

“And are you so sure you make the right decisions?”

The bony finger prodded him in the back.

“Mercy’s a fine thing, but judgin’ comes first. Otherwise you don’t know what you’re bein’ merciful about. Anyway, I always heard you Omnians were keen on smitin’ and crushin’.”

“Those were … different days. We use crushing arguments now.”

“And long pointed debates, I suppose?”

“Well, there are two sides to every question…”

“What do you do when one of ‘em’s wrong?” The reply came back like an arrow.

“I meant that we are enjoined to see things from the other person’s point of view,” said Oats, patiently.

“You mean that from the point of view of a torturer, torture is all right?”

“Mistress Weatherwax, you are a natural disputant.”

“You’d certain enjoy yourself at the Synod, anyway. They’ve been known to argue for days about how many angels can dance on the head of a pin.”

He could almost feel Granny’s mind working. At last she said, “What size pin?”

“Well, if it’s an ordinary household pin, then there’ll be sixteen.”

The mule picked its way down a bank. The mist was getting thicker here.

“No, but it’s as good an answer as any you’ll get. And that’s what your holy men discuss, is it?”

“Not usually. There is a very interesting debate raging at the moment about the nature of sin, for example.”

“And what do they think? Against it, are they?”

“It’s not as simple as that. It’s not a black and white issue. There are so many shades of gray.”

“There’s no grays, only white that’s got grubby. I’m surprised you don’t know that. And sin, young man, is when you treat people as things. Including yourself. That’s what sin is.”

“It’s a lot more complicated than that—“

“No. It ain’t. When people say things are a lot more complicated than that, they means they’re getting worried that they won’t like the truth. People as things, that’s where it starts.”

“Oh, I’m sure there are worse crimes—“

“But they starts with thinking about people as things …”