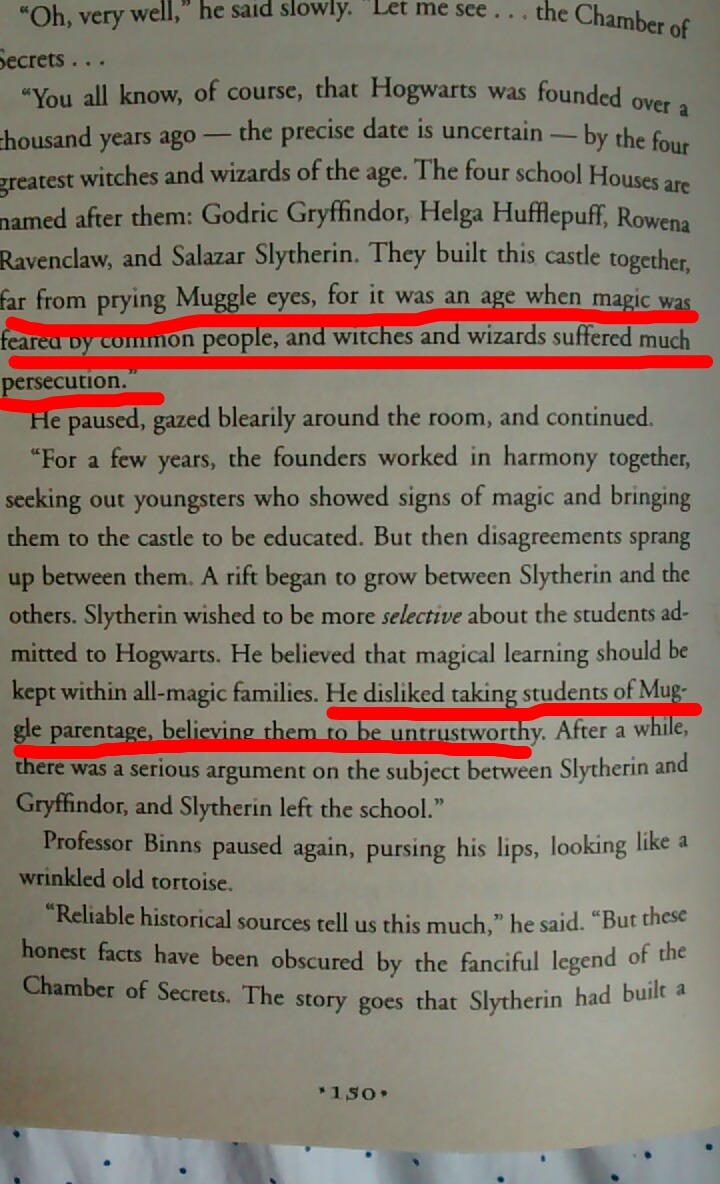 Here it is, canon evidence that Salazar Slytherin was NOT a racist bigot. He was concerned for the well-being and safety of the magical community, which could have been compromised by letting the “common people” know that wizards and witches existed.

Shoutout to this fine lady for bringing this to my attention. Let’s further the argument:

Hogwarts was canonically founded around 990 A.D. - The Christians were finally taking hold of Scandinavia, meaning that all of Europe was now Christian. It was towards the end of the Dark Ages, or else the Early Medieval Period, which (In Europe) was famous for its intolerance of non-Christiandom, which included the teachings of Ancient Rome, Greece, and of course any Eastern countries. People were publicly defamed and in many cases killed for as much as considering these old ideas and teachings. These teachings really didn’t come back to light until the Italian Renaissance in the 14th century.

So when people did things the Christians couldn’t explain, they blamed it on Witches; people they believed to be inhabited by the devil, sent to earth to wreak havoc on every God-fearing man, woman, and child. So what did they do? Imprison or kill those people.

Now, here comes Gryffindor, Hufflepuff, Ravenclaw, and Slytherin, who all agree to take pureblooded witches and wizards and teach them. But then they have to discuss magical folk who aren’t born from magic folk.

Gryffindor is brave and brash, and imagines the glory of having an entire society of witches and wizards with great command of their powers.

Hufflepuff is kind and loving, and wants to provide a sanctuary for all those who are under duress from the population at large.

Ravenclaw sees the merit in bringing all these different people together - the amount of information regarding magic that can be shared is the stuff of her dreams.

Slytherin is cautious. He recognizes that there is a great possibility for individuals to play spy for the Muggle community, in hopes to gain favor by outing them all the while hiding their own powers from muggles. He sees them as a potential threat, and instead of risking the safety of not only their own lives, but the countless volumes and tomes of ancient wizarding knowledge tucked away in their castle (see The Burning of the Great Library at Alexandria), Slytherin says “I really don’t think we should allow people with connections to Muggles in here. We could lost *everything.*

Gryffindor calls Slytherin a coward, saying they would fight back and beat down any who try to oppose them. Slytherin suggests they do all they can to avoid confrontation. Hufflepuff can’t bring herself to deny that sanctuary she’s built. Ravenclaw sees endless potential in bridging that gap between worlds with learning. And this is what drives them apart. Future racists and pureblooded elitists will take and twist Slytherin’s words, having heard only the story that has been passed down for a thousand years. They use words of caution to justify their want for genocide.

Slytherin isn’t the bad guy, here. And I am so down for clearing his name.

To continue the crusade to clear the name of Salazar Slytherin, I have more evidence for your consideration. This is regarding the Chamber of Secrets.

Now, the scene pictured above is one of Harry’s slightly less dull History of Magic classes, in which Professor Binns is asked to talk about the Chamber of Secrets. What we get from him is that the Chamber is a myth. There is legend surrounding it, no one is sure if it exists, etc etc etc.

Here is the VERY NEXT PAGE in the book, in which Professor Binns again admits to the Chamber (as we know it today) to be a complete myth. We find out, obviously, that the chamber isn’t a myth, but I believe that the purpose of the chamber has been fabricated over a thousand years by misinformation and slander.

Let’s check it out. Rowena Ravenclaw, Helga Hufflepuff, and Godric Gryffindor all know Salazar Slytherin and say “yep, he’s an upstanding man. Let’s start this school with him!” For a number of years, they had a school together and it worked out great. What we know is that there was a falling out, not Slytherin declaring they needed to murder muggle-borns! A disagreement that may have ruined friendships but did little else, I think.

What we know is that one of Slytherin house’s key virtues is self-preservation. As I discussed earlier in the thread on this post is that Slytherin was afraid of muggle-born witches and wizards acting as spies for the larger muggle community during a time in which wizards and witches were killed for their “demon powers.”

And so, when it comes to the Chamber of Secrets, I believe Slytherin built a Panic Room, not an Evil Lair.

Think about it. Slytherin is horrified that any day there might be an attack on the school. So he builds a secret chamber that only he (or another parseltongue, an incredibly rare magical ability) can open. He doesn’t want any double agents or spies to know about it, so he tells no one. He hopes, of course, that he never has to use it, but in the event that there is an attack, he can get the school to safety while he sets the basilisk on the attackers.

But I’m sure you’re looking at the basilisk and thinking “what sane man would put a monster in a panic room?” Glad you asked. I can consider two possibilities.

1) Slytherin put a basilisk that was under his control in the chamber, a creature that he could set loose on his enemies, aka, anyone attacking the castle. The basilisk would annihilate any army of thousands just by looking at them, and what’s more, it could get almost anywhere in the castle through the goddamn walls! That kind of power is exactly what you need to defend your castle. And again, ONLY HE or an heir could control it. I’m sure at this point he was thinking about himself and his potential progeny, not Tom Riddle some thousand years later.

2) Slytherin didn’t put the basilisk there, and it was instead placed there later by Tom Riddle while he was at school. I don’t have evidence supporting or disproving this.

So how does this get so misconstrued to modern-day Hogwarts lore? Maybe toward the end, the founders did find out about the Chamber. Maybe Slytherin said something to them, maybe he let it slip…maybe as they were cleaning out his room after he left, they found some journal entries about it. It could have been anything. But perhaps, in their wisdom, seeing no way to access the chamber, felt it best that no one knew about the existence of a (now) useless panic room, nor did they want anyone to worry about the basilisk.

Maybe word *did* get out, though. And not one of the founders wanted to admit that Slytherin didn’t trust their students, and so to most of the student body, Slytherin’s departure was suspect. And the moment they heard about a secret room that no one was quite sure about, they started inventing campfire stories about it.

Fast forward ONE THOUSAND YEARS and now everyone assumes Slytherin was always evil (despite being a good friend and founder of Hogwarts with three other lovely people) and created a secret evil lair to murder muggle-borns, which he could have easily done without a lair if that was *ever* his intention.

writtenley: zodiac–signs: lady-wanderer: lascumz: eliza-lou-riley: Boys, protect girls. Call people out when they make offensive jokes. Stand up to those who treat girls like objects. Walk a girl home if she feels unsafe. Listen to them and be considerate of their feelings. Destroy