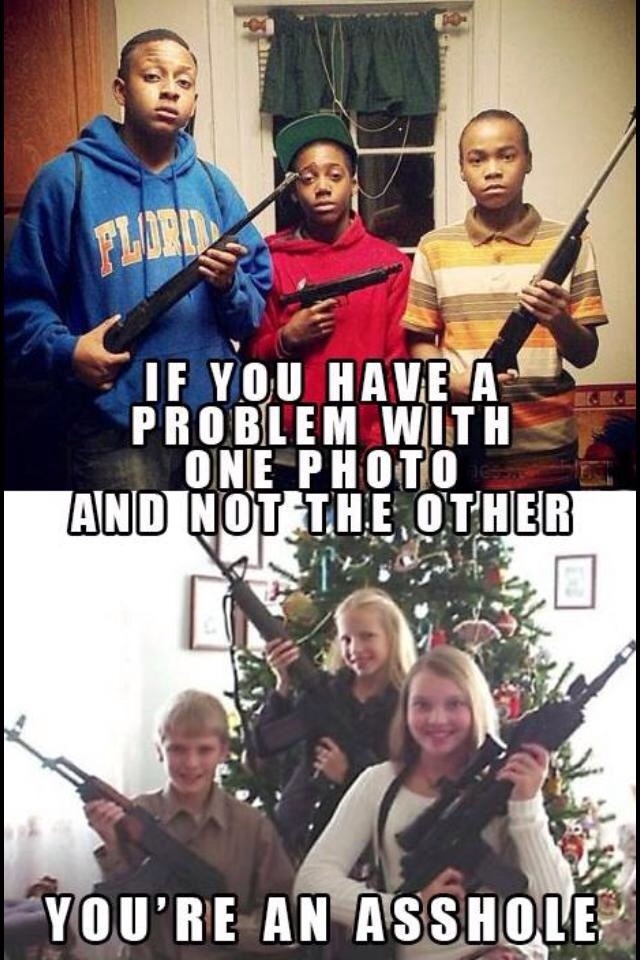 The automatic criminalization of black and brown bodies

Now hold on a sec I do INDEED have a problem with one picture but not the other.

In the TOP picture you can clearly see two hunting rifles and a mid-sized handgun, which are perfectly reasonable guns for a family to have, and it appears that all three people in the picture are legally old enough to at least have gone to a hunters safety course, which legally justifies the weapons being in their hands for certain purposes - hunting. Hand guns are carried by hunters to defend against bear attacks, should they happen, and by fishermen when fishing in lakes containing sturgeon … because the only way you’re killing a goddamned prehistoric dinosaur fish from hell is by shooting it (no joke).

Now the BOTTOM picture clearly contains only ONE child old enough to have gone through a hunters safety course … and not a single gun that is used for anything other than killing other human beings, and this I have a serious problem with. Guns that are intended ONLY for killing humans (the AR and AK series rifles, which are shown) with CHILDREN is a fucking problem.

Now, if they were hunting rifles in the bottom picture - you know, guns that are meant solely for the procurement of food - then I wouldn’t have an issue outside of the questionable ages of the children shown.

Really huge red flag on the bottom pic is the fact two of the kids clearly have their fingers ON THE TRIGGERS.

Its called trigger discipline. I’ve never been to any gun safety classes and I know that much.

I agree with the above but would like to add “the creepy gleeful grins” to the list of problems in the second picture. The bottom picture makes me /reeeeeeeeally/ uncomfortable.

agelfeygelach: armouredswampert: agelfeygelach: little-yogi: It’s a cute little thing though. Sometimes it is hard to remember that owls are incredibly dangerous predators seen by cultures throughout  the world as ill omens. Especially when they look like toasted marshmallows. My boss once described them

Death: YOU HAVE REACHED THE PLACE WHERE THERE ARE NO MORE ORDERS. Anghammarad: What Shall I Do? Death: I BELIEVE YOU HAVE FAILED TO UNDERSTAND MY LAST COMMENT. Anghammarad: (sits down) Death: GENERALLY PEOPLE LIKE TO MOVE ON. THEY LOOK FORWARD TO AN AFTERLIFE.