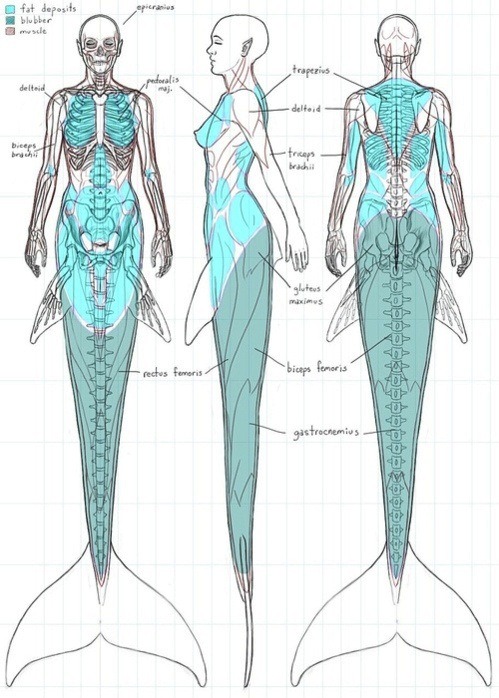 The Anatomy of a mermaid

i hate when people draws mermaid’s tail like it was some sort of goddamn suit on normal human legs like this: 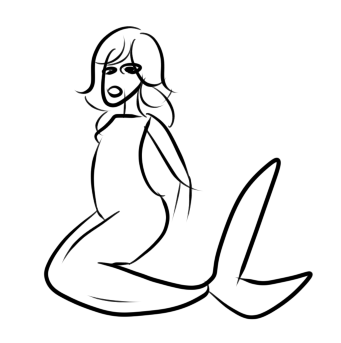 yeah we wouldnt want to make our mermaids too unrealistic

this asks more questions than it answers. they don’t really have vestigial legs, like those aren’t even motile fins, so why do they still have fully formed hips, why hasn’t the pelvic bone changed significantly? and where did the tail come from? 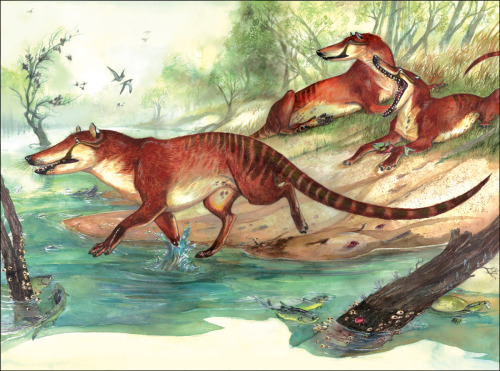 whales as we know them evolved from land animals that went back out to sea, and it’s all spine all the way down to the tail fin. the pelvis is vestigial to the point of being tiny and unrecognizable, and the rear leg structure is //gone//. and by the time they evolved all that, their forelegs had turned into proper fins and they didn’t have hourglass figures, because they built up walls of insulating fat and blubber where it was needed most - around the vital organs. 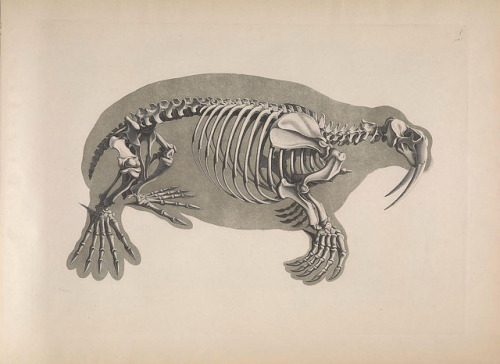 which brings us to the walrus. as you can see the skeletal structure and the external appearance are fairly ursiform - the rear legs are basically still in there forming the tail, and the pelvis is intact, and above that it may as well still be a land animal. if mermaids did exist, as hominids who went back out to sea, and if they hadn’t evolved into basically dolphins, then a walrus skeletal system, complete with vestigial thigh bones inside a kind of muscle skirt, and with significant fat and blubber deposits //on the main body// would be most likely. which is to say, mermaids with human torsos and seagoing lower bodies would waddle around on their tails, have clearly defined thigh structures, and would be a hell of a lot rounder above and about the waist than they’re usually depicted.

which begs the question, then, if you see a mermaid and it’s a skinny little thing with a slinky waist and an eel-like tail and a perfect bosom and a coy smile, //why does it look like that//? because whatever that is? it is not a land animal that readapted to the sea. it is not your distant kin. it is a sea creature that adapted //to get your attention//.

maybe it’s all an illusion, a frilly mane, an hourglass shape, and narrow antennae that mimic the shape of human arms, waving lonely sailors into the water, only to realize too late the bioluminescent patterns of lipstick and pert breasts are to distract from what lies behind them - viselike jaws and row after row of stiletto teeth.

or maybe it’s all soft tissue, the gelatinous bell of a jellyfish folded into a pleasing shape, luring the unwary down to be caught up in a tail that is nothing more than thousands of barbed lines of stinging neurotoxin cells.

or it could be that the tail goes deep into a shadowy well, and the beautiful woman is a mask for a single enormous jaw, the internal skeleton just the endless spine and ribs of a vast and hungry sea snake.

or, perhaps most terrifyingly, the face is real but not the face of the eyes looking out of it - a human mask for an intelligence both cold and calculating, wearing an inviting smile to bring you within reach of the dagger behind it’s back. waiting to slice the skin off of you because it needs a new disguise, because it is shaped like you but does not look like you, because it must pass as you so it can go among you, so that by starlight it may go on land and into town, where your kin are sleeping, unsuspecting.

Jesus Christ back up a minute buddy

I am 100% on board with eldritch horror mermaids.

Can I set up something to just reblog this every time I see it? Like automatically? Because this is perfect and I love this.

I am never going into the water again.

‘Retaliate’ by VNV Nation is my new jam. original post